A meeting with El País 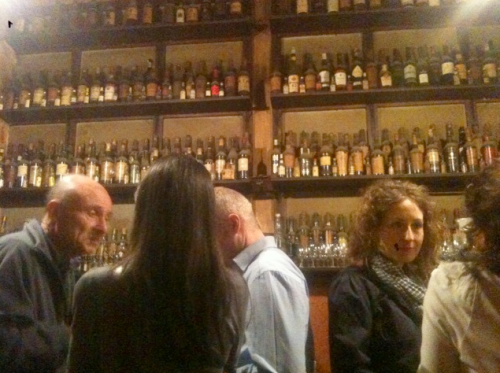 While on another superb TwiTrip in Madrid a few weeks ago, I met the El País blogger Patricia Gosálvez, who has just published this very nice interview with me.

You’ll notice it’s in Spanish. Below, however, is a translation, thanks to the amazing Ben Cooper. Heroic.

A Travel Writer of Only 140 Characters

A ‘Twitrip’ is the act of touching down in a place with nothing but the clothes on your back and being guided only by the recommendations of your followers on Twitter. ‘The clothes’ have to include a phone with access to the internet, obviously… The journalist Benji Lanyado has been ‘Twitriping’ since 2009 and giving accounts of his experience in The Guardian. Two weeks ago, his travels took him to Madrid where we caught up with him on the road in La Venencia (a top recommendation).

“Nothing has changed my way of working more than Twitter: for starters, it put an end to doing any research – I come with nothing at all!” explains with Lanyado in one of the most authentic old bars in Madrid. Here he takes a photo of a sign that reads: “Spitting on the floor is forbidden” and remarks (in fewer than 140 characters) that it’s got cecina (air-cured beef) “the Jew-friendly Jamon Serrano”. “It’s pure reporting, live – the tip-offs that people give you are specifically for the time and place in which you find yourself”, he says.

The idea of putting together travel stories using Twitter occurred to him in Berlin, when an airline left him stranded. He complained about it on the microblog site and someone recommended him a hotel. Then a cafe, then a shop… Delighted with all the tip-offs, he decided to experiment. His first ‘Twitrip’ was to Paris. He had to wait 20 minutes at the gate of the Gare du Nord before his first tip-off came in. But from there it was relentless.

He’s now covered most of the cities in Britain, going from ‘tweet’ to ‘tweet’, and recently he has branched out into Europe. Thanks to this system, he’s uncovered the likes of a transvestite’s cabaret in Blackpool where they did Michael Jackson medleys, an “amazing” Iraqi restaurant in the outskirts of Nottingham, and a karaoke bar in London in which he tells of singing Bryan Adams to a crowd of ancient Chinese people (and the guy recorded it – you can listen here).

His might seem like the perfect job – but it’s not without its difficulties. He didn’t stop – or let go of his mobile – for 12 hours. During that time, he’s constantly checking his messages, and when he likes the sound of a tip-off, he writes his 140 characters, takes a photo and video footage of the place, links to it on a map and publishes everything – “this is the most important thing” – before publicly thanking whoever gave him the ip-off. “The most inconvenient thing is the batteries” he says, showing the two spares he carries.

In Madrid, his followers sent him to Vicente Calderón (where he got onto the pitch and they kicked him out) at the bar Cock (whose name – ‘prick’ in English – amused him greatly), where he finished up the day with a Mediterranean gin with rosemary and olives (which I recommended to him by word of mouth).

Only once, in Brighton, some wag sent him to a parking lot in search of a gigantic duck-shaped statue – which, of course, turned out not to exist. “But the majority of people – between 200-300 tweets per trip – recommend amazing places to me, says Lanyado (who has 6,629 followers on Twitter. “Hey – where’s good to eat around here?”.

Will Twitter put an end to the good, old-fashioned street map?

This entry was posted in Stuff for the Guardian, Travel. Bookmark the permalink.